What to do in Val di Sole-Pejo, if it rains

Many tips from our guide for what to do in Val di Sole-Pejo, if it rains

Discovering the wonders of the Val di Sole and not only, in the event of rainy weather…

At the Eco Museum in Celentino, discover the traditions of the “The Little Alpine World” of the village of Pejo. Once in the Val di Pejo, there were traditions that have completely disappeared nowadays but some of them are remembered at the Ecomuseum in the village of Celentino. The Grazioli House in Strombiano, the Ecomuseum House in Celentino, the Venetian Sawmill in Celledizzo and the Campo Cottage in Celentino host objects and workshops that provide information about farming cereals, working linen and wool, sheep-farming, and how people lived in the past.

The small village of Pejo is situated at the foot of Mount Vioz in the Stelvio National Park. The traditional houses attract people who feel like walking across its narrow and steep lanes. There is the White War Museum that hosts a collection of memorabilia, weapons and photos of World War I. In the village of Pejo, there is also the last on-shift cottage of the Trentino region: they make butter and cheese daily (i.e. Casolèt and Nostrano) with the milk of cows and goats bred in Pejo. Every production is on shift and made by one of the members of the cottage. The dairy can be visited and cheese can be bought. In Pejo, there is also the smallest Museum of the Witches of the Trentino region and it the seventh museum in Europe to deal with this topic.

The fauna area is in the village of Pejo and it is a small green paradise that hosts deer and roes. Both children and adults will be happy to see them so close and spend thoughtless holidays in nature of the Stelvio National Park. In the village of Cogolo, you can visit the new visitors’ center: a journey between real and virtual environments of the Park: the forest, the pasture, the glacier, water and the rural world.

A day on the traces of World War I. The Strino Fort is the first Austrian fort made in upper Val Vermiglio and it hosts a permanent exhibition dedicated to the “White War” and, every year, it hosts contemporary art exhibitions. The War Museum in Vermiglio is a little jewel that collects objects and relics that Emilio Serra found in the mountains around the Val di Sole, in the Tonale Pass area and on the Adamello Presanella mountains.

A medieval building, Saint Michael’s Castle is situated on a rocky outcrop. Despite being in ruins, the creation of catwalks and stairs have allowed visitors to take in the breathtaking view over the Val di Pejo, Tonale Pass and the lower Val di Sole. The most peculiar and best kept part of the Castle is its 25 m tall donjon.

Discovering the lower Val di Sole, a walk in the streets of the historic center of Malè can lead to a visit at the museum which contains testimonies of the life of the past centuries in the Val di Sole and shows the main activities of the valley, means and ways of living, old crafts, agricultural and dairy tools for daily use. In the small village of Croviana, a short distance from Malè, inside the ancient building of the Mill, you can experience a fascinating sensorial journey to discover the world of bees and taste the sweet nectar of flowers: honey.

Thun Castle is surrounded by greenery and dominates the Val di Non from a hill of apple orchards. It is surrounded by towers, walls, ramparts and moat and large panoramic gardens that offer a splendid view over the Val di Non to the Brenta Dolomites. The internal rooms retain the rich original furnishings. If the weather is good on the way back, remember to stop at the famous red lake in Tovel with spectacular views of the Dolomites.

EDUCATIONAL TRAIL AT THE DIARY IN MEZZANA

Inside the Presanella Dairy in the village of Mezzana, there is an interesting interactive journey to the world of cheese: what a cow eats, why in summer it is brought to the high altitude cottage, how to milk a cow, what cattle breeds are bred, how milk turns in cheese, … You can also see the milk processing live.

It is one of the most famous sanctuaries in Europe with 5 superimposed churches built in about a thousand years, a spectacular example of religious architecture, a silent place built on top of a rock near the village of Sanzeno in the nearby Val di Non. A large brown bear guards the memories of this contemplative place.

An eco-sustainable journey by the Val di Sole electric train to reach the city of Trento, a journey through the apple orchards of the Val di Non. We advise that you stroll through the streets of the welcoming historic center and visit Piazza Duomo. It is interesting to visit the Castello del Buonconsiglio or drive to Le Albere to visit the Muse, the famous science museum.

TWO STEPS IN THE RAIN

Walking in the rain is good for the soul and spirit. When it rains, a short walk in the forest behind the hotel along the stream fills us with energy and also allows us to discover small animals, such as frogs and snails, that go hidden on sunny days. Furthermore, even the rain, as it comes, can go away, leaving room for a magical atmosphere illuminated by the rays of the sun that penetrate the forest. 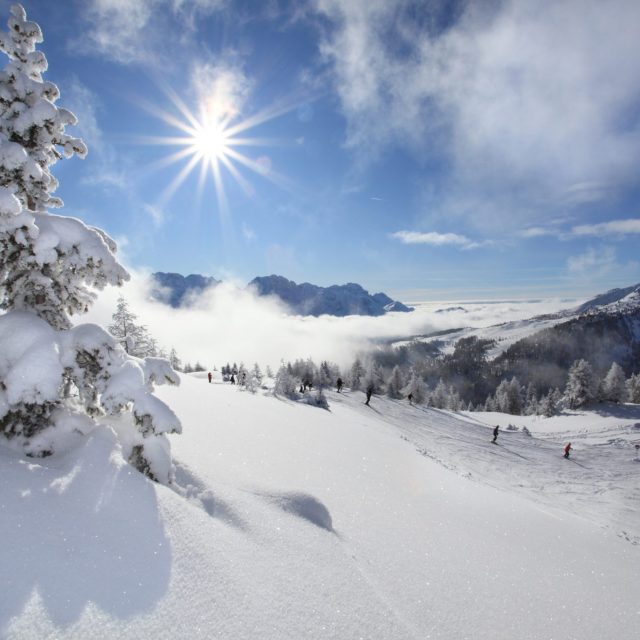